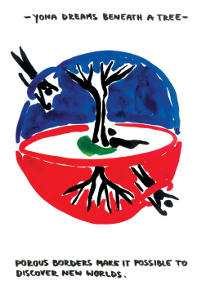 END_OF_DOCUMENT_TOKEN_TO_BE_REPLACED

By fostering the decomposition of her future corpse, Jae Rhim Lee makes certain she will make a beneficial material contribution to  ‘earth’ (soil) that supports life on ‘Earth’ (planet). The prodigious transformation of inert substances into living matter occurs within the narrow zone where the bottom layer of sky and the top layer of our planet intersect. It is precisely the zone where burial is located.

These contrasting districts opeate on complementary but opposing power sources. The energy that drives the above ground food web issues from the sun, while the energy that propels the soil food web emits from decaying organic matter. Thus photosynthesis and detritus are functionally related.  When these energy sources are synchronized, the bacteria and fungi underground conduct the heavy work of nourishing above ground populations of all kinds. This miraculous assemblage ultimately accounts for every living entity that ever existed on our special planet.

Switching metaphors from Mother Nature to Lover Nature indicates a radical shift from relating to nature as a provider, healer, and comforter, to relating to nature as recipient of protection, augmentation, and attention. This supremely special lover thrives on adult mutuality, as opposed to infantile dependence and lack of responsibility.

According to biologist E. O. Wilson, humans are entering an “Age of Loneliness” because we are not only losing the companionship of non-human species, we are converting opportunities for love into acts of warfare.

Wilson notes, “Step into places of diversity, complexity and abundance and you find yourself going straight into the heart of eros. You encounter love, and from love one is moved to care, and from care to action, and from action to imagining a world without all this violence.”

Beyond congratulating the organic farmers in Oregon for this triumphant victory, this headline may be a game-changer for the GMO industry as a whole. As Steven Rosenfeld reports on   AlterNet:

A coalition of Oregon organic farmers has beaten Monsanto—the corporate agriculture giant—in a landmark federal lawsuit that will make national waves by the way that their rural county banned the use of genetically modified seeds.

The legal challenge brought by commercial farmers who use Monsanto’s genetically modified alfalfa seeds was challenged by the non-organic farmers.Technically, the $350,000 fine is not a lot of money for a major corporate entity. In the fall of 2014, Montano posted total sales of $15.86 billion. At the same time Monsanto reported that the company lost $156 million in that quarter, presumably, one reason is that it spent a significant amount of money to defend the use of GMOs and destroy efforts to require labelling of GMO products.

Which Myth Will Be Ours?

The drama that is currentlyunfolding is being played upon a planet-wide stage that reaches far into the atmosphere and into the depths of the seas. It engages the mighty forces of raging winds and torrential rains, shattering earthquakes and collapsing towers of ice, flushes of invasive populations and witherings of beloved species. Consensus holds that the future will not resemble the past. But it is not known if we are heading toward a worldwide ecosystem adjustment or an epic terminous!

The works of art being created by contemporary eco artists present compelling samplings of material conditions and options. This is an emotional narrative, as fraught with dread and uncertainty as it is invested with optimism and humor. However diverse the outcomes they are imagining, none anticipate a return of the Medieval belief that Paradise on Earth that they envisioned as a congenial climate, abundant vegetation, and perpetual daylight seven times brighter than a sunny day.

At the same time, eco artists hope to avoid updating the mythic tales that describe disasters wrought by angered deities to punish humans for their wanton ways.  The international precedents for this tragic scenario include:

Lithuania: the supreme god Pramzimas saw nothing but war and injustice among mankind so he sent the giants of water and wind to destroy earth.

Egypt: people had become rebellious so Atum destroyed all he made and returned the earth to the Primordial Water.